ANCHORAGE, Alaska – GCI, Alaska’s largest telecommunications company and one of the state’s largest employers, celebrated its veteran workforce during its annual Veterans Day Observation in honor of those who served and currently serving. GCI has celebrated employees who have served annually since the inaugural breakfast gathering more than 30 years ago.

It’s a meaningful tradition for its 211 declared veterans – 11% of the GCI workforce. Alaska leads the nation in the number of veterans per capita, and the Anchorage community is home to nearly 25,000 active, guard and reserve members serving at Joint Base Elmendorf-Richardson.

“Having so many veterans in your backyard is a boon for veteran recruitment and hiring,” said GCI Chief Human Resource Officer Joe Wahl.  “We work closely with local military bases and the Veterans Administration to attend any job fairs that we think gives us that face-to-face time with veterans. We know veterans bring multiple skills to the job – high work ethic, leadership, and strong commitment to teamwork. We’re proud to support our veterans it’s no surprise we value what they bring to GCI.”

Jessica Taft, director of business marketing and U.S. Navy veteran participated in the virtual event and sees first-hand how GCI supports its veterans and their impact on company culture. “As a veteran at GCI I feel supported all year. I’m seen and I belong and that matters to me. It’s also meaningful to work for a company that hires so many veterans. Veterans influence our company culture every day and I believe we’re part of what makes GCI such a strong leader in Alaska.” 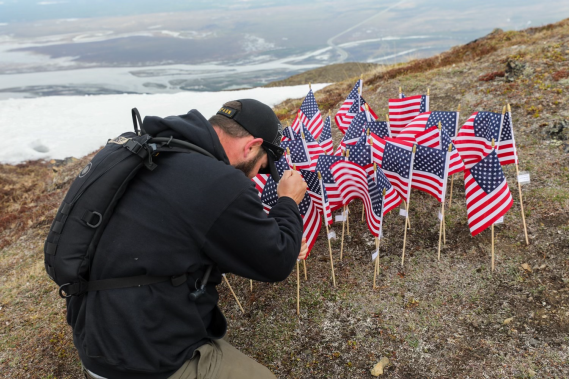 Gold Star Peak, Inc. is dedicated to helping veterans, active-duty members, and families of fallen service members who have died in combat heal in nature.

Joining the virtual celebration alongside GCI veterans were colleagues and guest speaker Kirk Alkire – a U.S. Army veteran and founder and president of Gold Star Alaska, Inc. – an organization dedicated to helping veterans, active-duty members, and families of fallen service members who have died in combat heal in nature.

Alkire joined GCI’s virtual event telephonically while at the base of Gold Star Peak with numerous other climbers – a now annual tradition on Veterans Day that has a special meaning for Alkire and the groups he takes with him.

“I never knew the impact of what climbing did for our Gold Star families. I quickly found out that the space on top of a mountain provided an enormous amount of healing,” said Alkire. “I wanted to do my part to help those struggling with the often-hidden scars of war. They run deep. They run in our community, across our state and across the nation. Veterans and families come from all over the U.S. to find peace and closure on Gold Star Peak.”

Through its philanthropic program GCI Gives, GCI has supported Gold Star Peak, Inc. and its impact on the military community.

“GCI has really stepped in to help with their charitable giving the past few years. It allows us to accomplish our mission of helping our veterans that need the most support.”

Throughout the virtual event, GCI veterans were encouraged to share photos of themselves in uniform and details about their service and occupation. The event moderator, Chief Human Resource Officer and U.S. Air Force veteran Joe Wahl broke the ice by sharing a photo of him and his veteran son during their service. “Okay everyone, I want to see some of the old-timers like me in their BDU [battle dress uniform]!” said Wahl.

The GCI Veterans Day Observation plans to return to an in-person celebration in 2023.

“Despite this year not being an in-person gathering, it’s an important tradition that not only celebrates, but promotes team building among employees and demonstrates how Veterans Day is a meaningful day for everyone at GCI,” said Wahl.