While the AU-Aleutians Fiber Project promises a technological leap into the future, GCI is careful to preserve the past

ANCHORAGE, Alaska — As GCI crews steadily dig miles of trenches to house hundreds of thousands of feet of conduit and fiber optic cable in Unalaska in preparation for the landing of subsea fiber late next year, they are also keeping a watchful eye for relics of generations past. To help safely identify and preserve historic artifacts unearthed during GCI’s AU-Aleutians Fiber Project, the company is partnering with dedicated archaeological experts.

Led by King Cove native Sean Mack, cultural consulting company Area M was brought on the project through an RFP process due to the cultural and historical significance of the region, and to ensure the project abides by Section 106 of the National Historic Preservation Act.

With his team, Mack monitors construction to record and identify any unexpected and uncovered historical sites, following a strict programmatic agreement in the case of discoveries. After artifacts are exposed, work is stopped and an evaluation process begins. Any information gathered is sent to the state, the city, the local village corporation and the U.S. Department of Agriculture Rural Utilities Service (RUS) where next steps are determined with each entity.

“I was really excited when Area M Consulting was awarded the bid for this project because I know how important infrastructure and communications are for the region,” said Mack. “I was born in King Cove and my family is still there. I used to commercially fish and try to visit as much as I can, although it’s tough because of the inaccessibility of the region. It’s hard to explain in words how big of an impact this project will have on the communities in the region.”

In the planning stages of the project, the team used state records to map known archeological sites along the route of the subsurface fiber optic cable. This gave them knowledge of what’s already been found and where to flag high potential site areas. However, when digging through an area that has been culturally used for ten thousand years, coming across unexpected sites is likely, according to Mack.

“The Aleutians are very unique from an archeological perspective,” said Mack. “You have a 1,200-mile island chain with an Alaska Native population that’s been there for 10,000 years. There’s also a large World War II component to factor in, alongside Russian colonization history, American history and of course prehistoric sites.”

According to Mack, one of the first forays into archeology in the region was in the 1930s by a man named Aleš Hrdlička.

“He was interested in skull shapes and osteology and often used unscientific processes, including grave robbing,” Mack said. “Sadly, a lot of history was lost and you can still see the effects of his practices today. While there’s a lot of lingering mistrust in archeology in these areas, it’s also understood that it’s needed because no one wants another situation where they’re not given a voice. I think it’s a great thing when Section 106 is followed and a process is established.”

“Including villages and tribes in the process of the project has been a priority for us since the inception of AU-Aleutians,” said Jenifer Nelson, Senior Manager of GCI Rural Affairs. “We’re excited to offer urban-level speeds to these remote communities while preserving the culture and history.”

To date, the team has uncovered a utilidor from WWII, a u-shaped cement box that power lines are run through. As the trenching continues toward the town center and eventually out to Unalaska residences and businesses, the team expects to find more historical artifacts.

GCI’s AU-Aleutians Fiber Project will run more than 800 miles from Kodiak along the south side of the Alaska Peninsula and the Aleutians to Unalaska. The $58 million project is scheduled to deliver gigabit speeds for the first time to Unalaska in late 2022 with the communities of King Cove, Sand Point, Akutan, Chignik Bay and Larsen Bay to follow.

More details about the project and updates can be found at gci.com/aleutianfiberproject. 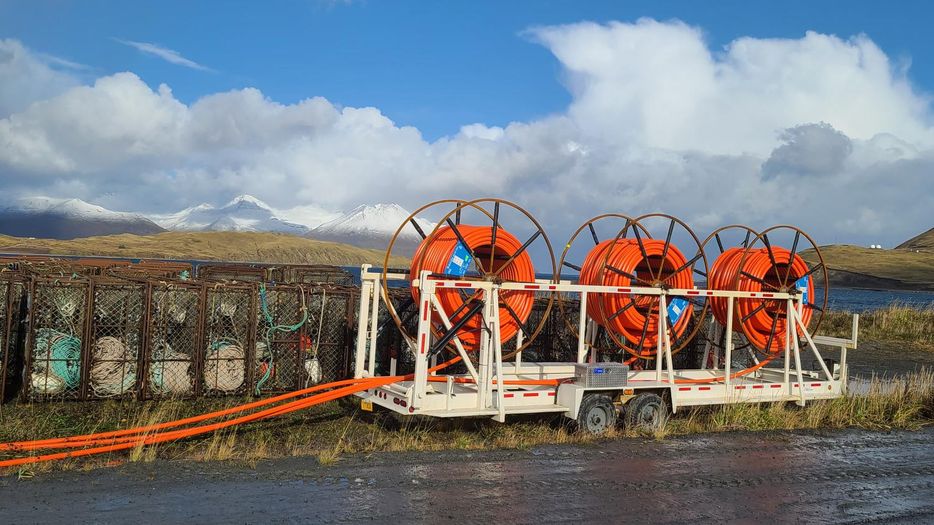