As one fiber ship makes the long haul up the Aleutian Chain, another tackles the rough waters along Kodiak Island

ANCHORAGE, Alaska – As the C/S IT Intrepid makes the long journey from Unalaska to Larsen Bay laying 800 miles of subsea fiber that will serve as the backbone for GCI’s AU-Aleutians Fiber project, a second ship, the C/S IT Integrity, is making a shorter but just as important voyage. The Integrity’s objective: deploy the final stretches of fiber that will connect Larsen Bay and five other AU-Aleutians communities to GCI’s existing subsea fiber network.

Working closer to shore in areas well known for rough seas and nasty weather, the Integrity and its crew are deploying approximately 85 miles of subsea fiber between Larsen Bay and Mill Bay, near the City of Kodiak. 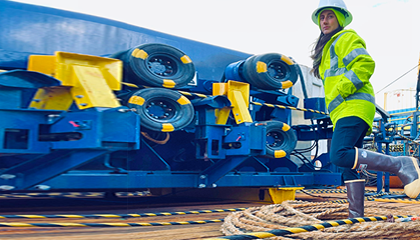 GCI Construction Manager Mariah Luze aboard the C/S IT Integrity.

“The work will be done in the most shallow and narrow segments of the route in areas with high tides and swift currents, for which the Integrity is very well suited,” said GCI Construction Manager Mariah Luze, who is overseeing GCI’s efforts aboard the ship. “The route recently took us through Whale Passage near Port Lions, between Kodiak and Afognak Island. It’s absolutely magical watching the crew aboard this ship work as one cohesive unit, 24/7. Even when things get a little stressful, this crew works as one.”

Deploying this crucial stretch of fiber isn’t the Integrity’s first foray into GCI’s AU-Aleutians Fiber Project. For much of July, the ship completed what’s called a “pre-lay grapple run,” which clears man-made debris from the fiber route between Unalaska and Larsen Bay. 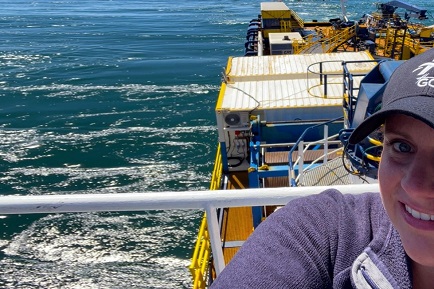 GCI Permitting and Compliance Specialist Valerie Haragan aboard the C/S IT Integrity.

“During the run, the Integrity’s crew found and pulled up and moved old cables, lost crab pots, and even an old telegraph line from 1908,” said GCI Permitting and Compliance Specialist Valerie Haragan, who was aboard the Integrity during the pre-lay grapple run. “While this process is crucial to ensuring the safety and longevity of our new subsea fiber, it’s also important that while we’re clearing the debris we meticulously document what we find and that we take special care to take care of Alaska’s wildlife and natural resources and ensure the safety of Alaska’s rugged, but delicate marine ecosystem.” 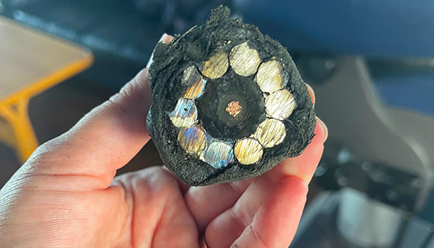 Crew from the IT Integrity pulled up a section of telegraph cable from 1908 from the bottom of the Gulf of Alaska.

Over the next two years, additional crews will be on the ground preparing each of the six AU-Aleutians communities for the installation of fiber to the premises, giving them some of the most-advanced network infrastructure in the nation. The project is scheduled to deliver urban-level speed, service and reliability for the first time to the communities of Unalaska and Akutan by the end of 2022, Sand Point and King Cove by the end of 2023, and Chignik Bay and Larsen Bay in late 2024.

“GCI has worked for decades to deliver the best-possible connectivity solutions to our customers and is committed to bringing fiber, the gold standard of connectivity, wherever possible,” said GCI Rural Affairs Director Jenifer Nelson. “Fiber will enable us to deliver 2 gig speeds and urban plans and data packages to consumers in these small, extremely remote communities. This has been GCI’s vision for years and I’m so excited that it’s finally happening. It will be transformational for these communities.”

The project is expected to cost $58 million. GCI was awarded a $25 million grant from the U.S. Department of Agriculture’s ReConnect program in support of the project. The company will invest $33 million of its own capital to pay for project costs not covered by the ReConnect grant. More information about the project can be found at https://www.gci.com/aleutians.