Crews have deployed 80% of Unalaska's fiber-to-the-premises

Almost exactly one year ago, ground crews in Unalaska began digging miles upon miles of trenches to install hundreds of thousands of feet of fiber conduit – 529,000 feet to be exact. But do you know what’s not in the fiber conduit when we deploy it? Fiber! That part comes later once the conduit is buried and the trenches are filled.

There are a couple different ways to install the fiber optic cable; you can either pull the fiber or blow it through the conduit. While each has its own advantages and drawbacks, blowing the fiber through the conduit is a clear best option when you’re essentially building out an extensive greenfield local network, like we are in Unalaska and other AU-Aleutians Fiber Project communities.

Blowing, also known as jetting, the fiber uses a machine to float fiber through the conduit using highly pressurized air. It’s a more complicated technique, but it allows smaller crews to more efficiently install the fiber thousands of feet at a time. Jetting the fiber also enables it to traverse directional and elevation changes more easily and reduces the chances for potential friction-related damage than pulling. And, so far, it’s working incredibly well in Unalaska, where we’ve deployed 80% of the fiber needed to connect nearly every building in the community to GCI’s subsea fiber by the end of the year. 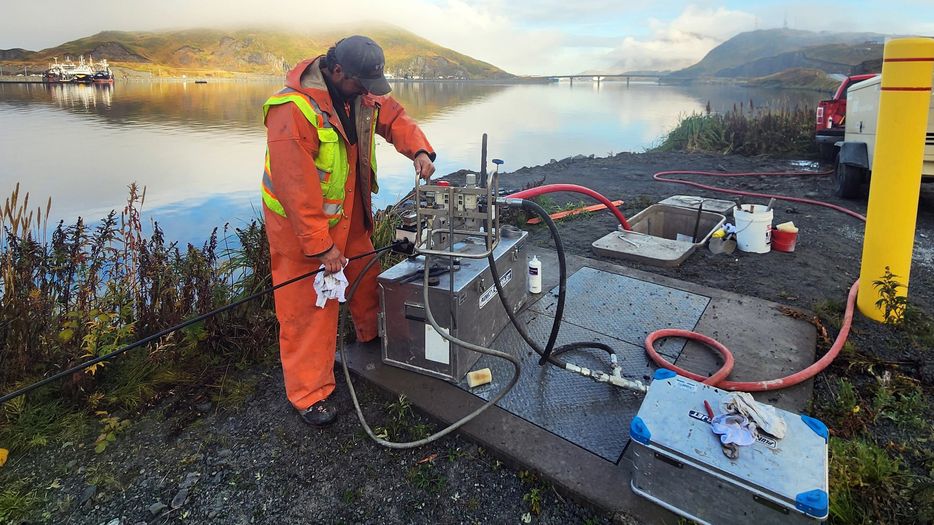 Over the next few years, crews will work their way up the Aleutian Chain, installing hundreds of thousands more feet of fiber conduit and hundreds of miles of fiber, building out local networks in each of the AU-Aleutians Fiber Project communities. These new local fiber-to-the-premises networks will be among the most-advanced in the nation, enabling GCI to deliver multigigabit internet speeds to the region’s residents.

The project is scheduled to deliver urban-level speed, service and reliability for the first time to Unalaska by the end of 2022, Sand Point and King Cove by the end of 2023, and Chignik Bay and Larsen Bay in late 2024.

The project is expected to cost $58 million. GCI was awarded a $25 million grant from the U.S. Department of Agriculture’s ReConnect program in support of the project. The company will invest $33 million of its own capital to pay for project costs not covered by the ReConnect grant.

The work won’t stop here – as a new project ramps up to extend fiber optic connectivity to six more communities in the region. The Native Village of Port Lions, in partnership with GCI, was recently awarded a $29.3 million grant from the National Telecommunications and Information Administration to bring urban level connectivity to Chignik Lagoon, Chignik Lake, Cold Bay, False Pass, Ouzinkie and Port Lions in the coming years.

GCI has worked for decades to deliver the best-possible connectivity solutions to our customers and I’m excited for our team to bring fiber, the gold standard of connectivity, to some of the most-remote communities in our state. The AU-Aleutians Fiber Project will be a game changer for these communities and will help to close the digital divide for a dozen rural Alaska communities.

More information about the project can be found at http://www.gci.com/aleutians.